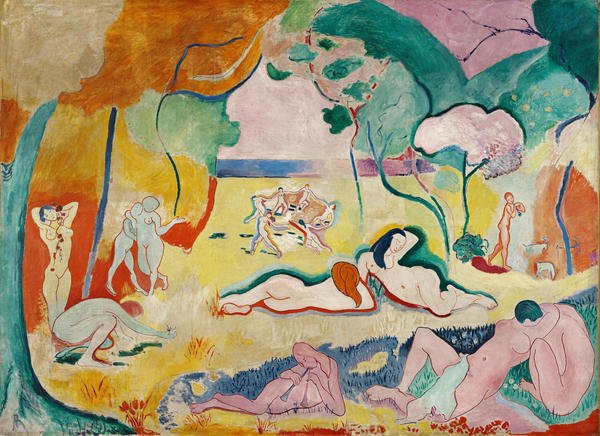 When you stand in front of Matisse’s masterpiece, ‘Le Bonheur de Vivre’, you are not an outsider anymore…it draws you in with its colors, its landscape, and the beauty of its figures. You become part of the stage-like scene created by the trees, to draw your eye to the sensuality of the nude figures.  True to its name, the mood is joyful, positive, and playful. The strong colors stand independent from the energy of love and beauty that the figures exude to create a composition that is complementary in its contrast. It grabs your attention and gives out vibrancy and luminosity that emits from the canvas. One can’t help but think of the modern-day Garden of Eden ( though art historians have likened it to the mythological theme of Arcadia),  where time is of no consequence and nothing else exists except love and beauty. You see that freedom in the circle of people dancing in the background, or the girl picking flowers, the casual flute player, or the couple enjoying their love-making oblivious to the others. The two girls, who become the central focus of the canvas..sensual in their pose create an oxymoron with their bold, red outlines that add to the signature of Matisse’s style. Self-love in harmony with nature is the key. The emotional vibrancy of colors and the softness of the forms create an exotic paradise as an expression of pleasure. We see that the pictorial perspective Matisse creates is unrealistic in its form, with the green tree anchoring the entire scene and the circle of figures losing its subjective relationship to it. And yet, through its unrealistic portrayal of color and dimension, the whole scene has an energy that binds it all together and creates a connectedness between the canvas and the viewer making them merge together as one.

Ernst Ludwig Kirchner’s ‘Bathers at Moritzburg’, is an artistic depiction of people who have broken the confining shackles of materialism and city life to reunite with nature. It is a rebellion against the old stifling norms of society to create a free, bohemian way of life that lives in harmony with nature. The scene comprises modern-day bathers who are unabashedly naked rather than artistically nude. The nudity was a realistic representation of bathers enjoying this unconventional lifestyle and open uninhibited attitude to the naked form and sexuality. Kirchner’s portrayal of the nudes brought a new flair and directness that was refreshing and exciting. They communicated an emotion, a pleasure that was almost theatrical to the viewer.

From 1909 to 1911 Kirchner and other members of the Brücke group spent part of each summer at the Moritzburg Lakes near Dresden. It is believed that these nudist gatherings at Dresden were part of the new way of thinking especially with the younger generation in Germany, that included vegetarianism, dress amelioration, and alternative medicine and lifestyles, that quickly got absorbed into the transformational and direct thought process of the early Expressionists.

The first element that draws you in when you see the artwork, is the aggressive contrast of high-pitched color. The bold flesh pinks, tangerine oranges, and lime greens of the figures against the sharp clash of the blue waters and greenery of the trees seem to enhance the nude forms, in a way that mocks convention and artistic tradition. Energy and vitality created from the spontaneity and movement of its figures further enhance the bohemian spirit. Kirchner said that the first thing he did when he started a painting, was to grasp everything while in motion in bold strokes without it being naturistic, and to this he added strong vivid color, “as pure as the sun generates it…”

One cannot help but notice a deliberate dichotomy in the modernity of the canvas being coupled with the primitive and tribal inspirations, in the way that one of the female figures is squatting by the water or the distortion of the faces, that was a very strong element of Expressionism. The figures are unapologetic and comfortable in their skin and we see only a couple of figures loosely covering their bodies with fabric, in a leisurely nonchalant fashion. Whether they were standing, sitting, lying, or dancing, Kirchner’s nudes were always natural. It was like he caught every movement of theirs in the most spontaneous moment, leaving no room for artificiality.

In 1926, Kirchner revisited his canvas, making the colors lighter and the surface of the painting more even.

Although both Matisse and Kirchner had nudes as their central theme, the thought behind them was very different. Matisse used the nude form as an aesthetic, a decorative value to the canvas whereas Kirschner expressed a rebellion of ideas and lifestyle through his nudes, using it as a transformation of the naked form and sexuality.

The romantic dreamlike expression that resembles a paradise in Matisse’s ‘Bonheur de Vivre’ is replaced by a depiction that is realistic, chaotic, and vibrant in mood, by Kirschner in his ‘Bathers at Moritzburg’.

Visibly noticeable, Matisse’s forms are softer and more languid in nature compared to Kirschner’s linear,  angular, almost spikey figures. While we sense innocence and sensuality in the bodies at Bonheur, the Moritzburg figures are bold and unapologetic in their nakedness. As much as both artists were fascinated by primitive and tribal forms, their interpretations were quite different- Kirschner using it for its primal instincts as an expression rather than its noneuropean decorative sensibilities that Matisse incorporated. We see not only the human form stripped down to its nakedness but also the landscape around it..the curve and softness of Matisse’s trees and foliage giving way to Kirschner’s more lifelike landscape while still retaining a relation to harmony in Nature. One can see a balance between the figures and the landscape ratio in Matisse’s work whereas the Bathers are tightly packed in a joyful and playful manner, leaving little room to include the scape of the scene.

Although similar in their strong use of independent color and bold visible brushstrokes, Matisse uses a contrast of strong colors in a non-naturalistic manner compared to Kirschner’s exaggerated clash of vivid colors.

Arnold Schoenberg, an Expressionist music composer, described the process of expressionist music as gradual and “ in accordance, not with any wish or will, but with a vision, an inspiration, it happened perhaps instinctively. It seeks to express the composer’s inner emotional state.”

Expressionism was an avant-garde movement that originated in Germany at the beginning of the 20th century. After World War 1, the Art scene gave way to a more realistic and revolutionary thought process. Romanticism was discarded and it could be said that Expressionism was a reaction to the Impressionists’ rose-tinted, ethereal sweetness to a rebellion that looked inward to the angst and fear lurking in the emotional subconscious. In Art, as in music, there was a high level of dissonance and extremes of pitch-whether in color or in notes. The artists expressed themselves in an emotional experience, from a subjective perspective rather than the physical plane of the Impressionists era.

Expressionism was irrational, sometimes unstable, and even lurking on the borders of nightmarish ( as in Munch’s, Scream). It allowed the artist to echo his troubled inner soul and feelings on the canvas creating a free-flowing and instinctive work. The colors they used reached a pitch that was almost unhinged and chaotic and the gestural brushstrokes were bold and textured. Expressionism forced people to look inward at their own demons and fears.

The  Die Brucker manifesto of 1906 stated ‘we want to achieve freedom of life and action against the well-established older forces’. The Expressionist artists created art to resonate this freedom, by combining elements of old German art and African and South Pacific tribal art, with fauvism to create a distinctly new style. They also went back to a more bohemian lifestyle that connected directly to nature with their nude canvases,

The Brücke’s attitude to nudity was, however, possibly the most revolutionary aspect of their work.  The Expressionists imbued their figures with positive and sexual energy, influenced by the writings of Nietzsche and Walt Whitman. Their work purged the sexual repression prevalent in society by replacing it with an uninhibited and free lifestyle. This sexual abandonment was definitely anti-establishment and defied the until-then detached approach to the nude in contemporary French art. The Brücke were living their philosophy of free-living and abandoned sex on summer trips in nudist camps, in perfect harmony with nature and their canvases.

This carefree harmony was looked down upon as a lack of ambition and urgency by society that was nearing the war.

Their jarring and sometimes violent depiction of the artists’ inner turmoil was too radical for conventionality. The main aim of the Die Brücke artists was to rebel against the constricting forces of the bourgeois culture, which to them signified mediocrity, corruption, and weakness.

The way I see it… This is modernism. It provokes a reaction so that it can reinvent and renew itself. It pushes the borders of sanity so that it can express itself as intense, direct, and spontaneous. It is raw, uninhibited and creates an emotional tension.

And it shocks the world..

Shocks it out of its old, dusty vision to create a way forward.

To open its mind to the new.

To accept and embrace a texture of experience that would otherwise be hidden.