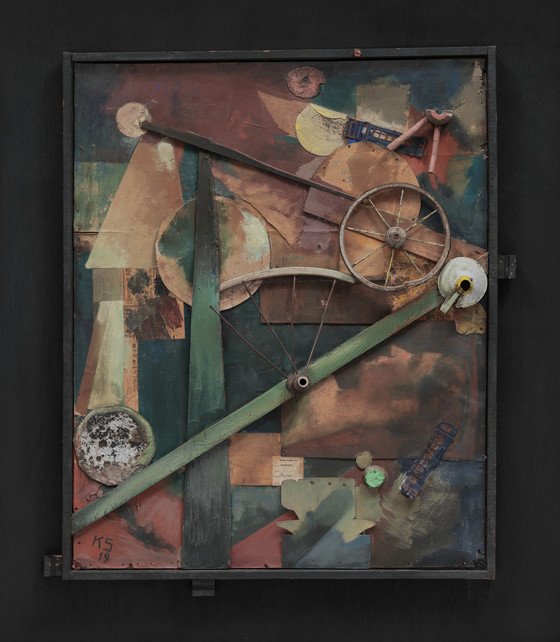 “Every page should explode, either because of its staggering absurdity or the enthusiasm of its principles.” ~Tristan Tzara, Manifesti del dadaismo

Founded by Hans Jean Arp, the Dada Art movement, much like its name had no meaning. It was based on the absurd, the nonsensical, and the ridiculous.

It came about to highlight the absurdity of World War I (1914-1918) and a breakdown of civilization. It was an emotional reaction in the form of humor, satire, and paradoxes. A group of artists united to create a kind-of anarchist movement that questioned the futility of war, rejecting all things rational and applauding subversion. The movement brewed simultaneously in Europe and America; its leaders, typically in their twenties, used the tools of manifestos and art exhibitions of absurdist art designed to shock and ridicule the authorities and the people. Their expressions were full of spontaneity, satire, and irony and they used gestures and to incite provocation.

Dadaism was a philosophy that broke down all the boundaries between high art and real life, with its shameless uninhibitedness and impartiality.

Their Performance Art had its foundation in a Neo-Expression that defied all rules and conventions of society, creating its own language of humor and satire.

A few of the typical elements of the Dada movement were the Collage and the Photo Montage and the use of everyday objects as art.

The Collage was a way of rejecting artistic skill by tearing printed materials ( a rejection of organized thought or information) to reassemble it in a way that creates either a humorous or deeply disturbing artwork. Because the Collage was defiance of traditional artistic skill, it was in many ways a perfect medium for Dada iconoclasm and social protest. Unlike the Cubists’ methodical use of collage, the Dada artists used it very randomly- it was an unruly disorder.

Dadaists also invented a form of collage known as Photomontage, which incorporates photographs, sometimes along with other collaged and painted elements. These were usually sourced from advertisements and journalism and added a reality-based, factual visual to create a mockery of the social, political, and cultural climate. Photographs were often overlaid with words that intensified the rebellious effect of the montage. Also, wordplay and humor played a big role in the titles that the artists gave their work. It was used in a way that changed or influenced the way you perceived that work.

Another important element was the use of Everyday objects or ‘Readymades’ as coined by artist Marcel Duchamp. It described ordinary, prefabricated objects selected by an artist and presented as art. Sometimes the object is altered, such as by combining it with another object to make an ‘assisted readymade’. The first readymade was a lowly bicycle wheel mounted upside down on the seat of a stool, created by Marcel Duchamp. These were challenges to social conventions and mostly counterproductive from their original counterpart. For example, Man Ray’s iron with brass nails on its surfaces, making both objects dysfunctional and useless. The use of readymades led the way for artists to create Assemblages, which continued to I subsequent art movements like Surrealism. Eventually, the Dada movement dissolved with the establishment of Surrealism but the ideas it gave rise to became the cornerstones of modern and contemporary art.

The Three Artworks That Represent the Dada Movement

Dadaism is described more as an attitude than an art movement. Performance art was based on the idea of what we call Conceptual Art today, that the idea behind the work was more important than the work itself.

To me, there are three words that encompass the attitude and essence of the Dada movement. They are:

Marcel Duchamp’s L.H.O.O.Q O or ‘La Joconde’ a colored reproduction, heightened with pencil and white gouache, in Editions of 38 ,1920’s.

You can almost see the artist gleefully rubbing his hands together and laughing aloud after performing an almost childish prank of adding the mustache and the goatee to a postcard of Leonardo Da Vinci’s, iconic Mona Lisa. Nothing crosses the boundaries of being nonsensical more than this postcard ( the deliberate use of readymades) reproducing one of the art world’s most applauded works, in the most ridiculous manner. Not only did Duchamp deface the female ideal of feminine beauty, the Mona Lisa, with graffiti but he also violated gender norms by adding facial hair to a women’s portrait. This masculinization of the female is also a theme of gender reversal that was popular with Duchamp, who also had his own female pseudonym, Rrose Sélavy, or “Eros, c’est la vie” which means, “Eros, that’s life”.  La Joconde instantly became a symbol for the movement that rebelled against everything art represented, especially tradition and beauty.

Even the title of the work is a wordplay based on humor. The initials L.H.O.O.Q when read aloud sound like, “ Elle a chaud au cul” or “ she’s got a hot ass”.

Duchamp represents the Dada philosophy of choosing work and changing our association with it and forces us to perceive it in a different way than we did earlier. We denounce our previous context and view the work for what it is and what it stands for and represents and signifies. Another typicality is that the Dada artists gave their readymades an unexpected title. Leonardo’s title was replaced with an inappropriate title that plays with words that aim to offend rather than please, humor rather than glorified.

As the title signifies, this work uses a knife to symbolize the fragmentation that creates the defining culture of that time. Höch’s careful slicing and swathing from upper right to lower left corners separates the anti-D Dada and the Dadaists to convey the political and social environment of post-war Germany. She focuses on the role of women in society and in the art world and their rights and empowerment as a central theme. We see artist Kathe Kollwitz in the center and just below her is the dancer Niddy Impekoven, as the heart of the work, around which everything else rotates. You also see a little cutout of Höch’s face pasted in the corner on a map, which shows countries in Europe that had women’s voting rights.

If you were to see this work in terms of quadrants, the top right corner would be the anti-Dada corner, where you see all the politicians like Kaiser Wilhelm who has an absurd mustache created by two wrestlers. There’s also General Von Hindenberg whose head is placed on the body of an exotic dancer and then General Gustav Noske talking to another general who is standing on two male figures. All seemingly ludicrous to a point of a parody.

The lower right corner, however, is where you find the world of the Dadaists. To give a few examples, you find a figure of the Dada leader Raoul Hausmann, with who the artist had a relationship. You find the two heads of George Grosz and Wieland Herzfeld emerging from a ballerina body and Niddy Impekoven shows up again bathing John Heartfield in a tub. There are many other male dadaists and leaders from Russia and Germany shown as references in ridiculous infantile imagery. The top left corner sees a lot of Dada propaganda, with Einstein with a text box next to him saying, “ Hehe Young man. Dada is not an art trend” suggesting it was a movement that was here to stay and was meaningful.

The lower right corner is full of visuals of mass gatherings. We see German leader Karl Liebknecht saying “Come join Dada” along with Rosa Luxembourg who was tortured and assassinated.

To me, this work represents the universality of the movement. The anti-political, anti-social, and anti-cultural language that defined it, whether it was in Germany, other parts of Europe, or the united states. Höch cuts up all information (from newspapers, advertisements, and journalism) and then pieces them together as a Photomontage, in a way that makes sense to her. It is topical and relevant but it is also reconstructed in a completely new rebellious way. Besides the pictures, the text and words that show up in the montage to convey the sentiment, are another characteristic of Dadaism.

This work has multiple layers and a complexity that is overwhelming to digest at once. As Höch once said, “We, the Dadaists regarded ourselves as engineers, we maintained that we were building things, we said we put our works together like fitters.”

Höch’s work asserted itself to the changing gender roles in society, making her the ideal for Dada’s ‘New Women’. ‘Knife..’ mocks not only the politicians but also celebrates the women’s victories. It, therefore, seems befitting as a title, to use the woman’s humble kitchen knife, to slice out Weimar’s Beer-Belly Cultural Epoch and the figures aligned with it and take on an active role in taking forward the Dada Movement.