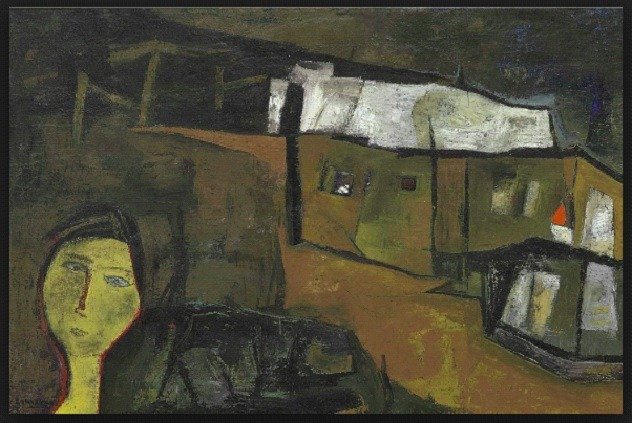 Ram Kumar’s brother, Nirmal Verma, couldn’t have described his works any better when he said, “History and memory become inseparable. There is something so delicately disturbing in his paintings. They evoke what we remember…creating an equivalence between memory and image.”

Ram Kumar, the master of quietude and tranquil practitioner of abstract landscapes, has left his stamp of individuality on Indian Art forever.The poetic intensity of his landscapes started out initially with faces…gaunt and lonely with melancholy eyes. The pain and engagement with the plight of an individual whether in his figures or in his abstract works, loomed large till the end of his days.

His early career was that of a banker and a writer with an Indian newspaper but his absorption with art began with his evening classes at the Sarada Ukil art classes. This led him to borrowing money from his father for a one-way ticket to Paris, where he studied under the ateliers of Andre Lhote and filmmaker, Fernando Leger. His friendship with his teachers bloomed and he soon joined the Pacifist Movement and Communist Party in Paris. He had once said that his Paris experience was what brought about his inner freedom and helped him to grow creatively. It was in Paris that he could view and experience world art and see the exhibitions of the masters, Picasso and Matisse who lived in France.

In 1952, Ram Kumar chose to come back to his roots in India and he formed a strong association with the Mumbai based, Progressive Artists Group. His deep sense of compassion for the destitute and the hopelessness of mankind reflected his state of mind. His works now saw lonely figures placed skillfully in between crooked homes, jagged landscapes and a bleak perspective of the common man.

It was, however, his visit to Varanasi, with his friend M.F Husain that became the turning point of his career. A dormant spirituality awakened within him and he was inspired by the city’s architecture and spirit. His darker colours gave way to greys and yellows. Slowly, the limiting figures disappeared and a more abstract form emerged. One could see the freedom in form, colour and strokes. His abstraction drew from his memories and saw the lightness and buoyancy in his compositions and colours.

“ When one is young and beginning, one’s work is dominated by content, by ideas. but as one grows older, you turn to the language of painting itself.. I have grown detached. I want to find the same peace that the mystics found, ” he said.

As he evolved, his works saw bursts of reds, blues and greens. The myriad melancholy saw shimmers of hope, joy and harmony. The bold, linear strokes were in juxtaposition to the austerity of the landscapes -the triangular roofs against a monastic sky, for example.

His work acquired sacredness to it… the quietness that held stories that you had to delve into. It was a pilgrimage and you couldn’t but help but bow to the master of abstraction.

In a strange way, Ram Kumar’s works held a romantic view of Life against Death…the free flow of colour balanced with a form, a discipline that gave us canvases that spoke through line and colour. He once said, that he fell in love with his work the minute his brush touched the canvas. Until his end, Ram Kumar, managed to express his feelings through his paintings His works were visual stories, poems talking about Life.

The meditative silences and sometimes, metaphysical nature of his work reflects on the artist himself. It is no wonder that someone described him as the waters of the Ganga, quiet and deep. And in that typical manner, he said to Gagan Gill in a 1996 interview, “ How long can one wish to be remembered? 100 years, 200 years, 500 years? So your soul may rest in peace? No I don’t care about that at all. I will not like to be remembered for anything…sometimes I feel like obliterating every single trace of my existence.

Not my paintings though”.

– The Indian Express (Ram Kumar: The artist with a view by Yashodhara Dalmia)