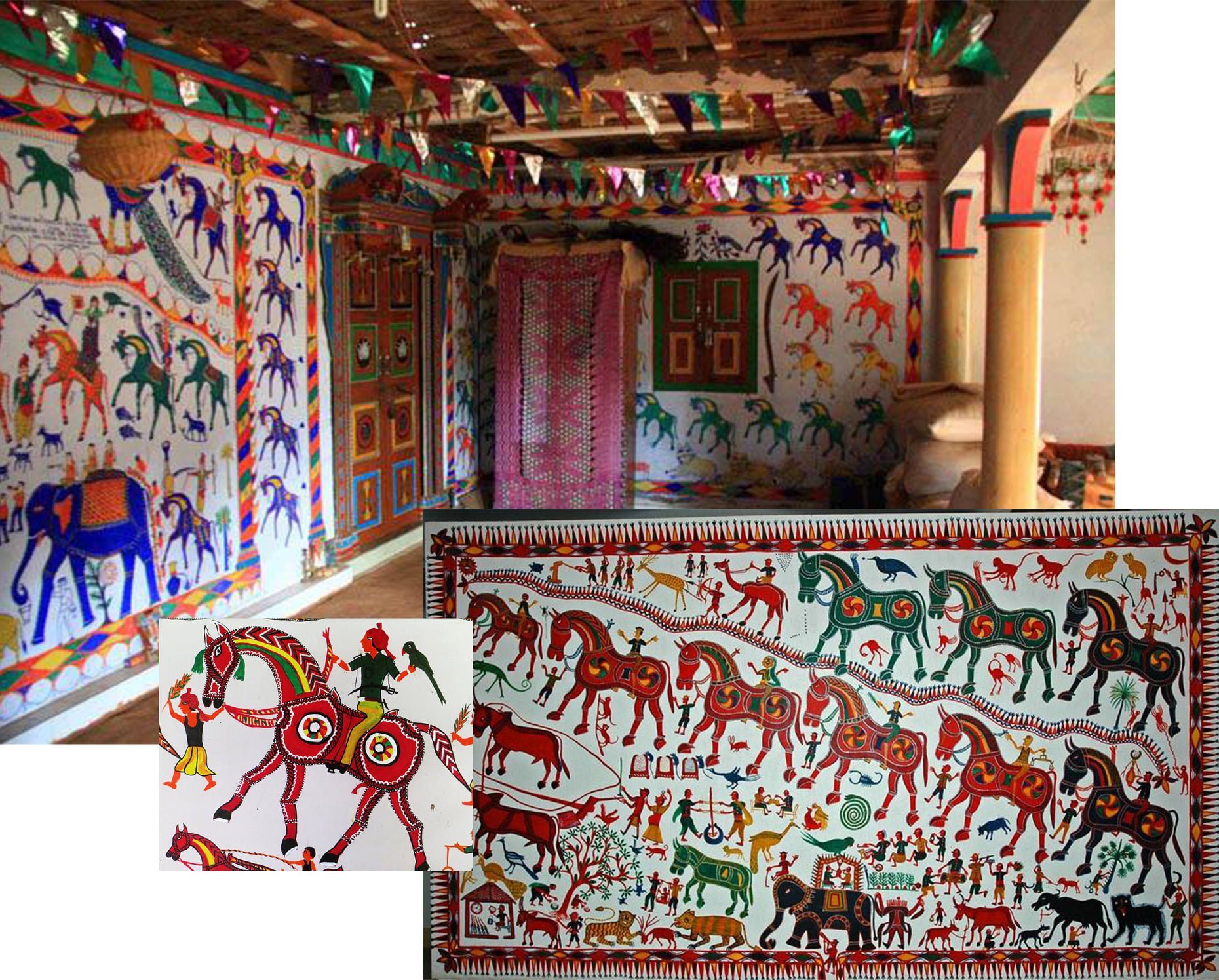 As we soak our feet in hot water after nine nights of intense Garba, we wanted to explore another Gujarati art form to keep that momentum going. Namely Pithora paintings, made popular by various tribes from central Gujarat.Pithora paintings were seen more as rituals than paintings, done by the Rathwa, Bhilala and Nayak tribes of central Gujarat. These paintings can be characterised by the depiction of seven horses that usually represent the seven hills that surrounded the area where the Rathwas resided. It is believed that the paintings were done as a wish or an offering of gratitude to God.

The origins of the Pithora paintings and even the reason behind why the Rathwas and Bhilalas follow this tradition can be broken down into three versions. The rules, however, remained the same for the method of painting; Three inner walls of the house must be painted, the materials for the ritual are to be brought by the unmarried women of the house, and the walls had to be covered in cow dung and tempered with “Pandu Maati” before the painting commenced. After prayers, the painting starts on a Tuesday or Wednesday. No family member residing in the house is allowed to paint; the paintings are to be done only by Pithora painters, also known as “Lakhadas.” The completion of the painting is accompanied by song and dance.

1. Paintings as a wish or to thank God.The head priest is summoned to listen to the problems of the tribe, the solution is then relayed and upon returning home, the member of the house has to get the Pithora painting painted on three inner walls of the house in order for the problem to be resolved. There are around 5 different versions of paintings that all address different problems, from family issues to cattle and crop.

2. As a map and a mark of loyalty. This version dates back to the 11th Century. Bharuch, a village popular for trade, was difficult and dangerous for traders and foreigners to travel to. So the Rathwas and Bhilalas decided to take the opportunity to make some money by escorting Indian and foreign traders through the region filled with bandits in exchange for silver coins.

To ensure that the area remained mysterious and their livelihood stayed safe, the leader of the tribe made a map full of codes. The seven hills were represented by the seven horses and two tigers symbolized the mouth of the river Narmada.To show loyalty to their leader, some of the Rathwas inscribed these paintings in their houses, and were subsequently given rights to climb and settle atop the seven hills

3. The story of Baba PithoraA tale of a king/God, Baba Indraj and his seven sisters. One of his sisters, Kali Koyal had an affair with Kandu Raja and gave birth to a child. Out of fear that her brother would find out and banish her from the kingdom, she wrapped the child in cloth and set it afloat on a Lotus flower in the Ganga-Jamuna. Down the riverbanks, two of her sisters, Rani Kajal and Rani Makhal heard the cries of a child and discovered the baby. Rani Kajal rescued him and brought him to the kingdom, where he grew up to be a fine young man. One day it was revealed to him that he was the nephew of Baba Indraj, and since he was taken care of by the king’s sister’s he had a right to the throne. Baba Indraj accepted that Pithora was indeed his nephew. Pithora could not claim a share of the throne nor could he get married without knowing who his parents were. So Baba Indraj invited everyone from the kingdom to celebrate his nephew and Pithora pointed out to his father that he had never met. That is why Pithora is celebrated as a God, and the paintings depict his procession along with his wife Pithori, his parents and his family, on their horses.

“These paintings denote the advent of an auspicious occasion such as weddings, childbirth, festivals in the family or the society as a whole. This spectacular art form essentially expresses the joy and celebration of a community, thus reflecting its collective mood.” Even though these paintings can be interpreted as several different things, the process and the celebration remains the same.